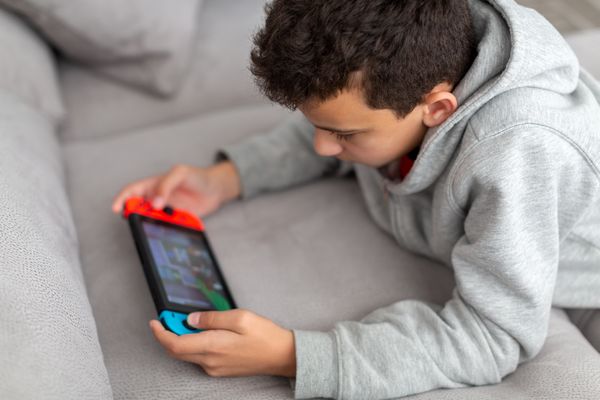 A boy lies on a sofa and plays a game on a Nintendo Switch. Evgeniy pavlovski/Shutterstock.com

Video games are a form of electronic entertainment that allows a person to play games on a computer, game console, or mobile device such as a smartphone or tablet. The technology that led to the first video games was developed in the 1940s. The first home video games were invented in the 1970s. Over the years, video games have grown from very simple line-and-dot designs to colorful, detailed graphics that look like movies. By 2019, the industry had grown into a multibillion-dollar business. Despite that success, video games have also been criticized for their violence and possibly contributing to childhood obesity and addiction.

Scientists in the 1940s first started to invent computers that could play games. These computers were programmed, or “taught,” to play simple games such as chess, tic-tac-toe, and checkers. In 1958, a scientist created a tennis game that used a bouncing dot as a “ball.” Many people consider his invention to be the first video game. Four years later, a student at the Massachusetts Institute of Technology (MIT) created Spacewar!, a game that featured two simple spaceships that fired weapons at each other. While the game was popular among computer programmers, it was only able to be played on large, mainframe computers.

By the late 1960s, scientists had figured out a way to play video games on home television sets. The first-ever home video console was called the Magnavox Odyssey, and it was released in 1972. That same year, a new company called Atari developed Pong, a tennis-style arcade game people could play by inserting quarters into a slot. In 1975, a version of Pong was introduced for home use and became even more successful.

In 1977, Atari released the Atari 2600, a home gaming console that could play multiple games. The Atari 2600 sold millions of units in the United States. It was so successful that other companies made their own home consoles. At the same time, people were also playing games at video arcades where coin-operated games such as Space Invaders, Asteroids, and Pac-Man were very popular. By the early 1980s, both arcade and home video games were a multibillion-dollar business. The success did not last, though. In 1983 and 1984, home computers were becoming popular and people started to become unhappy with the quality of new games. The industry was hurt financially, and video game companies such as Atari lost millions of dollars.

In 1985, a Japanese company named Nintendo helped revive the industry by introducing the Nintendo Entertainment System (NES). The NES featured games such as Super Mario Bros. and The Legend of Zelda. It sold millions of consoles in the United States and led to the creation of the handheld Nintendo Game Boy in 1989. In the 1990s, technology allowed video game graphics to improve and other companies began to introduce consoles to compete with Nintendo. The Sony Corporation released PlayStation in the United States in 1995. PlayStation used new technology that allowed games to store more information. This led to less expensive games, better graphics, and the ability to add scenes that looked like they were from movies. In 2001, computer software company Microsoft introduced Xbox, a system that made it easier for gamers to compete with friends online.

In the twenty-first century, Sony, Microsoft, and Nintendo battled for the title of the most popular game console. As Internet technology became more widespread, online gaming also began to grow and gamers were able to download games through their computers. The popularity of smartphones and tablet computers led to an increase in games played on these mobile devices. By 2018, gamers in the United States spent $43.5 billion on video games. The most popular types of video games were casual games, such as Candy Crush, with 71 percent of players engaging in these games. Action games and shooters were almost equally popular at 53 percent and 47 percent respectively.

Many young gamers enjoy games that combine such elements as creation and survival. Minecraft, for example, allows players to avoid dangerous situations and build structures. It has been compared to playing with Lego building blocks. As of 2018 more than 154 million copies had been sold, and the game had more than 91 million monthly players worldwide. Even these numbers were second to the fan base of Fortnite, which debuted in 2017. As of 2019 it had nearly 250 million players, a figure that grew by 125 million new players between June 2018 and March 2019. The online multiplayer game focuses on a mode called “Battle Royale,” on which one hundred players fight for survival. The last player still in the game wins. In addition to the millions who play the game, millions more watch others play on streaming sites.

As video games became more popular, concerns over the effects they have on children also rose. In 1994, the violence in the fighting game Mortal Kombat prompted the US Congress to push video game companies to create a rating system for games. Experts, however, continue to disagree on whether playing violent video games leads to violent behavior. Several studies have linked violent games to more aggressive actions. Other researchers question the results saying the studies were not conducted properly.

Video games are also said to contribute to the rise in childhood obesity in the United States, as gamers tend to spend long periods of time sitting while they play. Some companies have responded by creating games designed to make the user more physically active, such as dance and sports games. Studies have shown that these games can help people lose weight and stay healthy. Some research has also found that video games may cause gamers to become addicted to playing. Games that offer a player an “escape” from the troubles of everyday life may make it difficult for a gamer to stop playing and “leave” that world. Medical experts call this addiction Internet Gaming Disorder and researchers were studying the condition further to determine its effects.

console
A computer system made for playing video games by connecting it to a television or computer screen.
download
The process of copying information from one computer to another, usually over the Internet.
gamer
A person who regularly plays video or computer games.
mainframe
A computer used by a business or organization to store or process large amounts of information. Mainframe computers in the 1960s were the size of rooms. Modern ones are the size of a refrigerator.
software
The programs used to give instructions to a computer.